Главная — Montenegro Photos — Lovćen in Montenegro — photos from the trip

Visit Lovćen National Park and Mount Lovćen to see the beauty of Montenegro.

From the height of the mountains in clear weather you can see the Adriatic coast line and snowy peaks of the Durmitor National Park.

We started our trip from Budva, and further along the mountain road through the historical capital of Montenegro — Cetinje.

We drove through the town of Ivanova Korita, which is known for its holiday homes and ski slope. In the summer, they have an open theme park made up of several slopes directly on the trees. Thanks to the bungee, ropes, nets and obstacles with logs, this park, as well as the whole town, is loved by families with children. 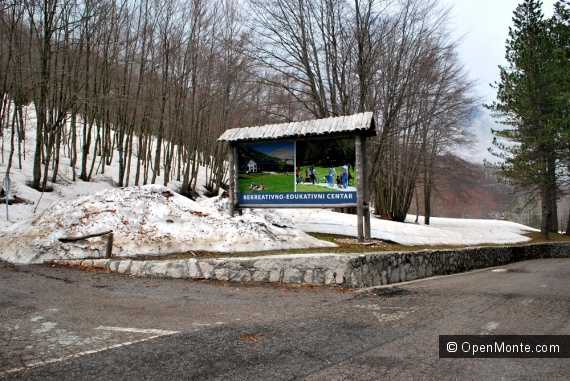 After this sign in Ivanova Korita we turned left and got a little lost, driving in the wrong direction. But we got a chance to check out this cozy village. We turned around and returned to the right route towards the Lovćen Mountains. 🙂 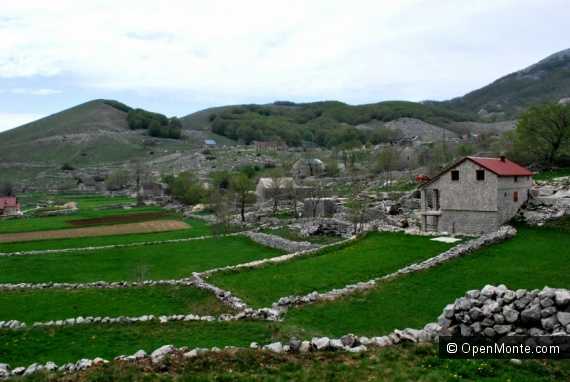 The snow on Lovćen melts by the end of June. After a few kilometers of a serpentine road, the top of Štirovnik with installed antennas on the peak became visible. 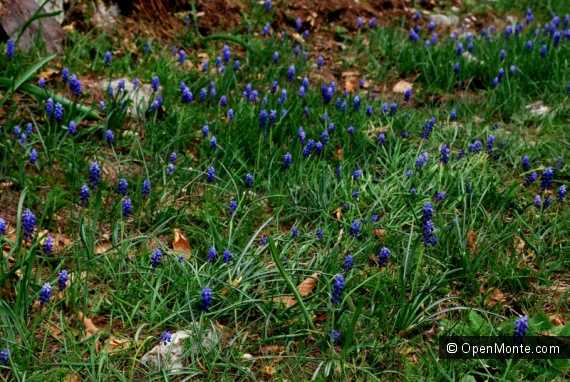 Photo of Mount Lovćen in Montenegro

Mount Lovćen has 2 peaks: Štirovnik (1749 meters) and Jezerski Vrh (1657 meters), on which the mausoleum of the most famous ruler of Montenegro — Petar II Petrović-Njegoš is located. 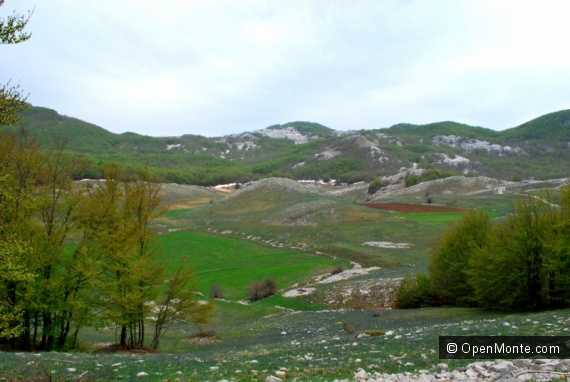 After arriving at a small parking lot, passengers of cars and buses leave their vehicles and walk up to Mt Jezerski Vrh. As we walked, the road started to get slippery, with a mixture of snow and clay. Then a small pine forest began. 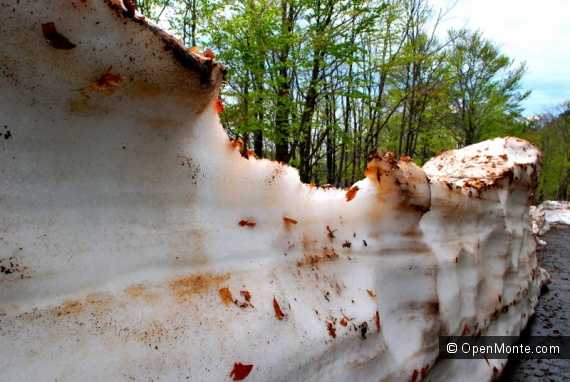 It seemed as though we would enter the mausoleum this very minute, but that impression was deceptive… When we reached the first observation deck, we found a small restaurant and a souvenir shop on the underground floor. The entrance to the restaurant’s toilet cost 50 cents. 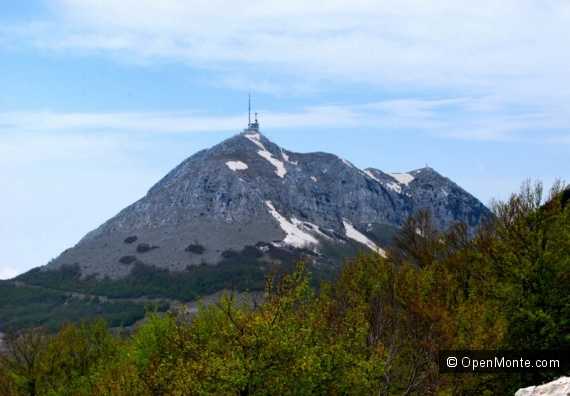 As it turned out, it was necessary to overcome another 461 steps up before entering the mausoleum. But it was worth it. Gorgeous views opened tour eyes! All the nearby villages and even the city of Cetinje were in full view. 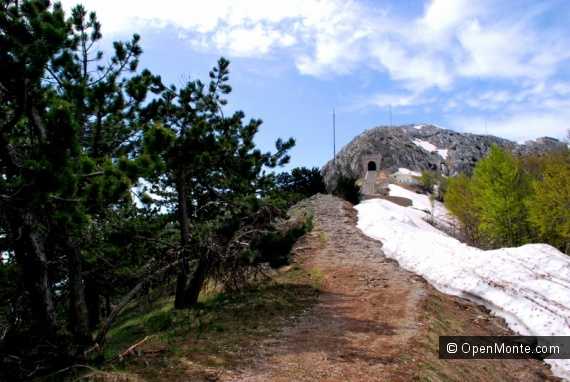 On the way through this staircase, there were still significant amounts of snow near the windows. The passageway itself was also covered with snow, but there was a small footpath to climb up the stairs. Later it turned out that this long staircase could be bypassed by an old upper staircase in the open air. 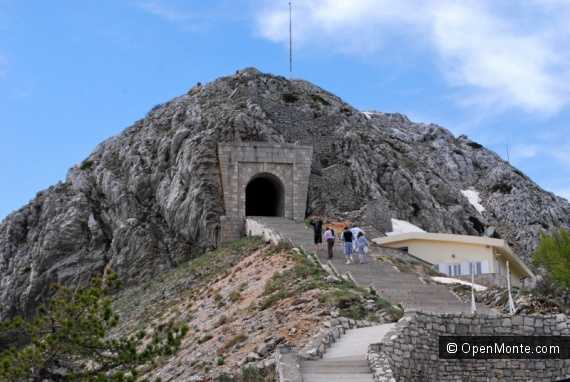 But such a way is more dangerous, as you can accidentally slip and fall from the mountain, that is very high! On this ancient trail, you can find such intricate pyramids of stones. 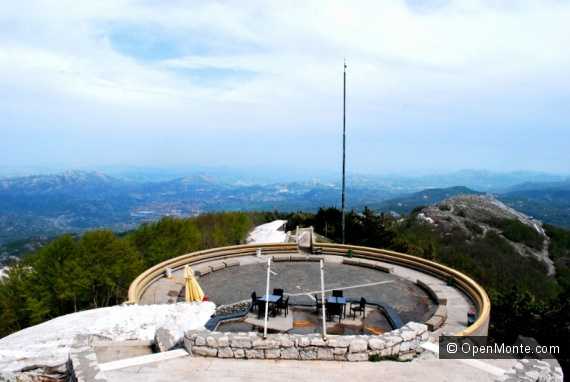 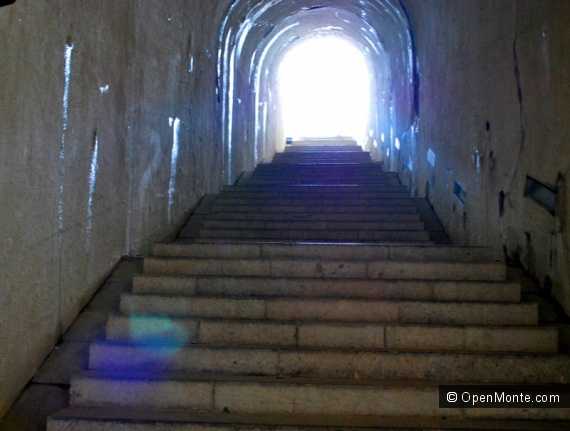 From the top of Mt Jezerski Vrh opens an impressive view of Montenegro, and you can feel the spaciousness and beauty of nature. In the distance, you can see the Adriatic coast, and in good weather you can even see the shores of Italy. On the other side there is the nearby summit of Štirovnik, Njegoš which is almost 100 meters higher than Jezerski Vrh. 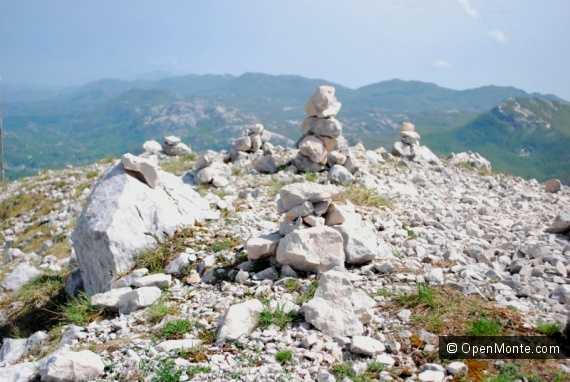 The ruler and poet Petar II Petrović-Njegoš wished to be buried in this place in order to admire the beauty of Montenegro after his death. He built a small chapel for this purpose in 1844. During the invasion of the Austro-Hungarian Empire, this chapel was destroyed, but its remains from Mount Lovćen were preserved and moved to the monastery of Cetinje. 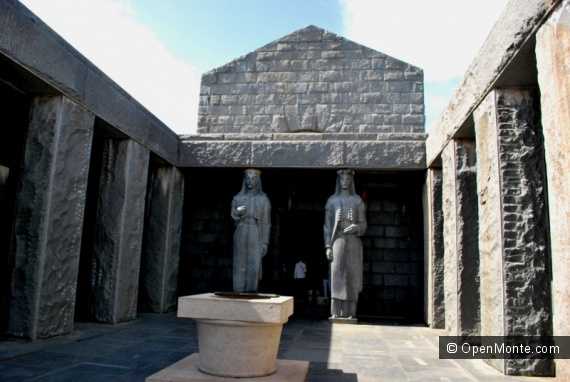 Later, they were brought back to Lovćen. But during the reign of the Communist Party in Montenegro, the chapel was demolished again, so the will of the ruler was not fulfilled. The modern mausoleum was built according to the new technical drawings in the 20th century.

Here is the view of the mausoleum, which op 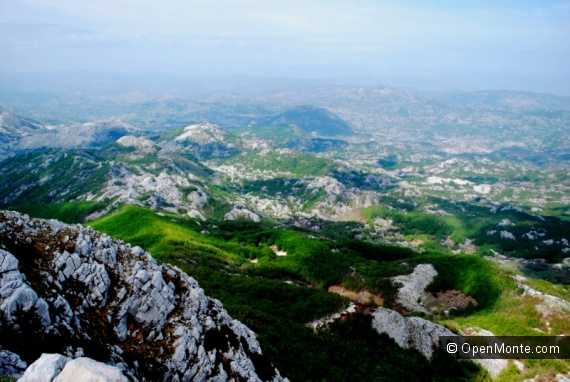 ens from the observation deck.

Today it is the highest mountain monastery in the world. The mausoleum was created by the famous Yugoslavian sculptor Ivan Meštrović. 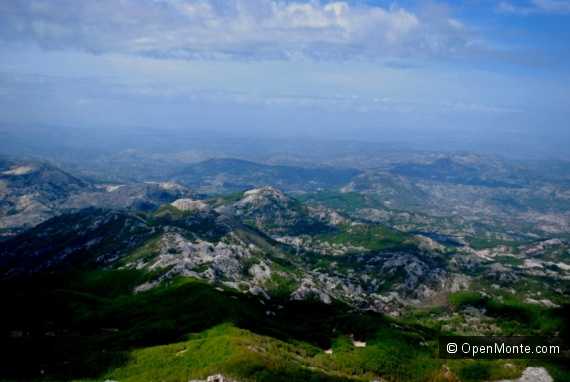 In the chapel, there is an impressive golden dome, under which the sculpture of Petar Njegoš is located. He froze in a thoughtful pose with a majestic eagle behind his back. This sculpture represents the spiritual beauty and strength of the Montenegrin people. 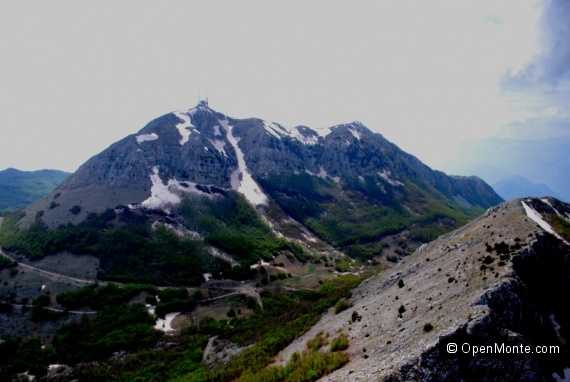 At the exit of the chapel, there is a small portico and a staircase, at the bottom of which it is very cold and windy. Down there, in the marble sarcophagus, are the remains of the great Montenegrin ruler Petar II Petrović-Njegoš. The light is dimmed and there are always fresh flowers next to the sarcophagus. This complements the atmosphere of deep respect and holiness of this place. 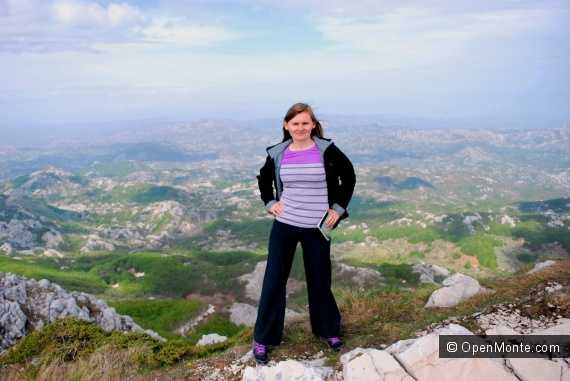 Petar Njegoš fought for the independence of Montenegro from Turkey and was against tribal separatism in Montenegro itself; he was an active supporter of Yugoslav unity. He demarcated the Montenegrin-Austrian border in the Adriatic coast. 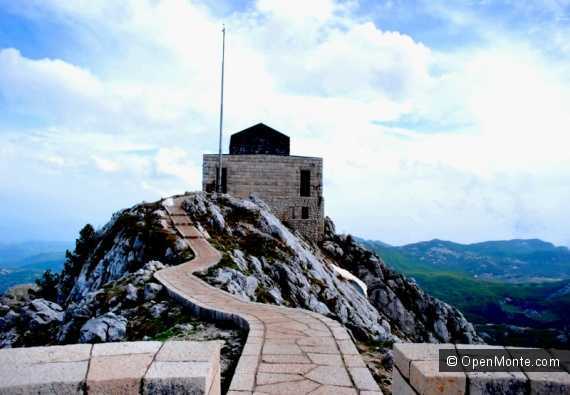 Petar Njegoš has published a number of his own books and collections: a collection of folk songs “The Serbian Mirror” (1835), a collection of poems “Hermit of Cetinje” (1834), “The Cure for Turkish Fury” (1834), an epic poem “The Freedom Song” (1835). The peaks of his work were the poems “The Ray of the Microcosm” (1845), “The Mountain Wreath” (1847) and “The False Tsar Stephen the Little” (1851). The ruler also founded a school and a printing house in Cetinje. Petar Petrović-Njegoš died of tuberculosis at the age of 38. 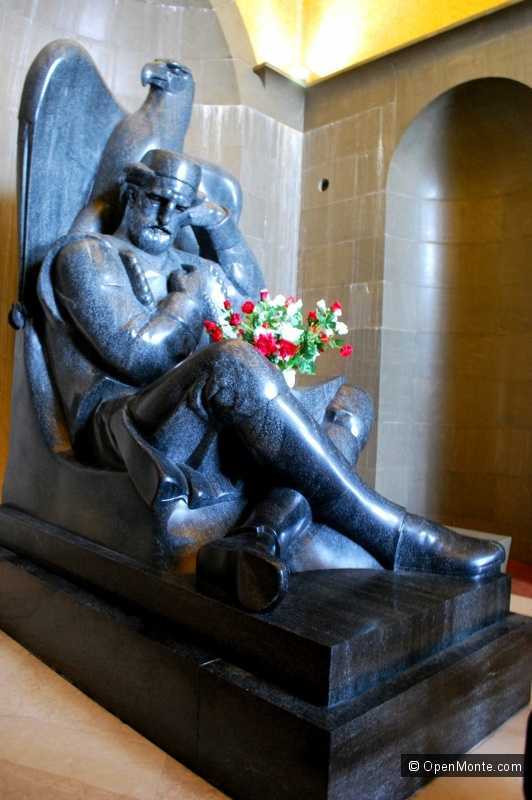 View of the observation deck from Lovćen Mountain. Lovćen became a national park in 1952. This park was created to preserve the unique nature of Lovćen and protect the historical, cultural and architectural heritage. 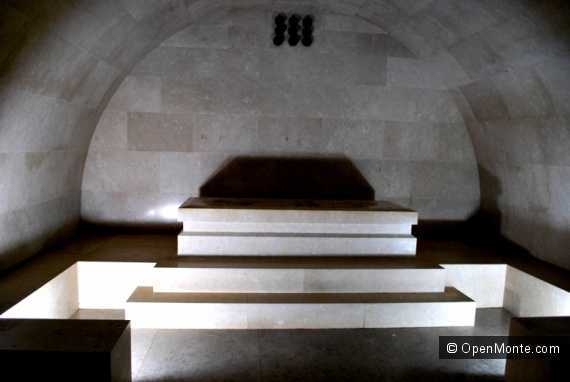 Our way back lay through the ancestral settlement of the rulers of Montenegro — Njeguši. Petar Petrović-Njegoš was born on November 13, 1813 in the village of Njeguši in the family of Tomislav “Tomo” Petrović and Ivana Proroković. Petrović-Njegoš dynasty was a ruling Montenegrin dynasty in the period from 1696 to 1916. 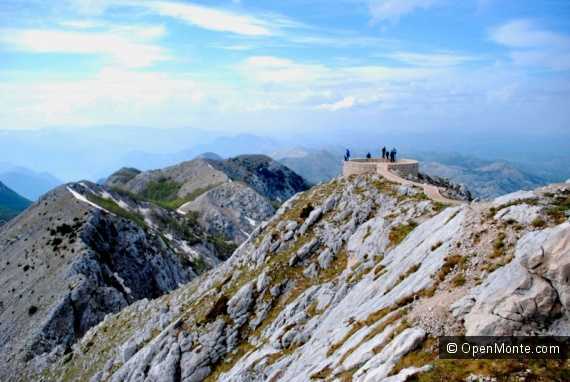 The village honors the memory of its rulers and famous people. The traditional architecture here is extraordinary. Almost every family in the Njeguši contains ancient recipes of njeguški pršut, cheese and wine. Everyone is welcome to try these delicacies and buy them as souvenirs. 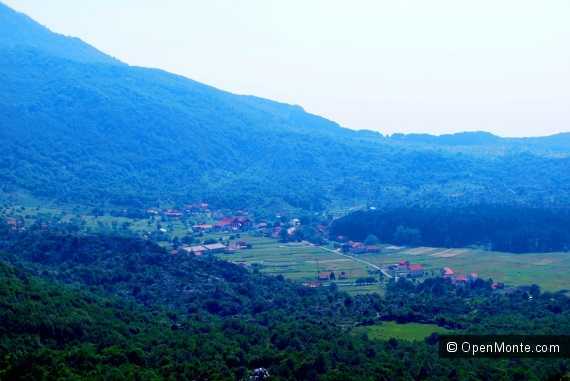