Главная — About Montenegro — The Roman city of Doclea in Montenegro

Just four kilometers from Podgorica, near the village of Rogami there is a large plot of land, fenced off from the road by iron netting.

The entrance is always open. You don’t have to buy a ticket and groups of tourists don’t visit this place.

Next to the entrance, there is a worn-out sign saying that the place is waiting to be added to the UNESCO protection list. It is probably a world heritage site. It is the largest and most important antique ruins in Montenegro — the Roman city of Doclea.

In the fenced area you can see Roman columns, capitals, thresholds of houses and outlines of streets and even the preserved part of the fortress walls. Neither tourists nor locals come here. The ancient Roman city of Doclea is being destroyed in front of our eyes, abandoned and unwanted. Why did this happen?

The history of Doclea

Once upon a time, the Romans chose this very place for its location. It is a vast flat area between the confluence of the Zeta River into Morača and the Širalije River into Zeta. Three rivers, which were filled with water for the majority of the year, protected the city from possible uninvited guests.

The city was in close proximity to the important Roman route that connected Skadar and the present-day Spain, to which the road of local importance led. This, according to researchers, explains the absence of Doclea on many Roman maps.

Doclea was named after the Illyrian tribe of Docleati, who inhabited these areas during the Roman conquests. The first written references of the city are in the books of Ptolemy (the 2nd century), which describes the city and its internal structure.

In later sources the city is already mentioned under the name of Doclea; despite the associations with the name of the Roman Emperor Diocletian (282-305 AD), Doclea is not connected to him. 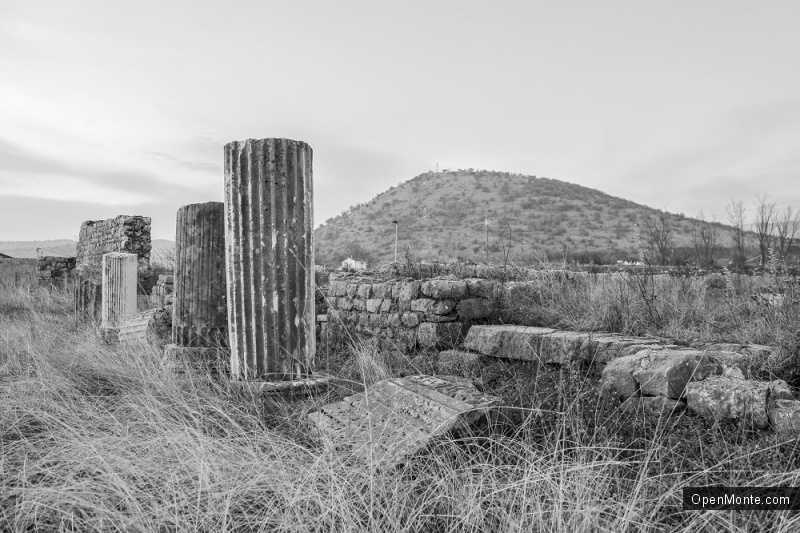 Most likely, the city was founded in the very beginning of the first millennium, during the reign of Emperor Vespasian (9-79 AD), when most of the cities in the Roman province of Dalmatia were founded.

The inner structure of the fortress city

Massive fortress walls 2 to 2.5 meters thick with towers, embrasures and bridges surrounded the city. The thickest walls were on the northwest side of the city, as there was no river. Therefore, a moat was surrounding the fortifications.

The city was built using the classical Greco-Roman plan − “chessboard”. The two main streets cut through the city at a right angle, and all other streets moved away from them parallel to each other, thus creating square residential neighborhoods. The intersection of the two main streets was the main square, or the Forum.

The main street headed east from the Širalije River to the Morača River, and the city administration buildings were located on its sides. Not far from the Širalije River bridge, a triumphal arch was built in honor of Gallienus (3rd century AD). To the right of the arch was the temple, next to the ruins of which was found a statue of Roma (goddess and personification of Rome).

Clearly, the temple itself was dedicated to Roma. Not far from the first temple there was a second one — the temple of the goddess Diana (the patroness of flora and fauna, hunting and fertility). Further down the street was a large palace with a vast courtyard, around which rooms, kitchens and baths with cold, hot and warm water were located.

As in all Roman cities, the city center had public baths (balneae) built according to the standard layout: an exercise room, a changing room, a hall with warm and cold water, rest rooms and a library. All the rooms were richly decorated with floor mosaics and sculptures, the remains of which can still be seen today. 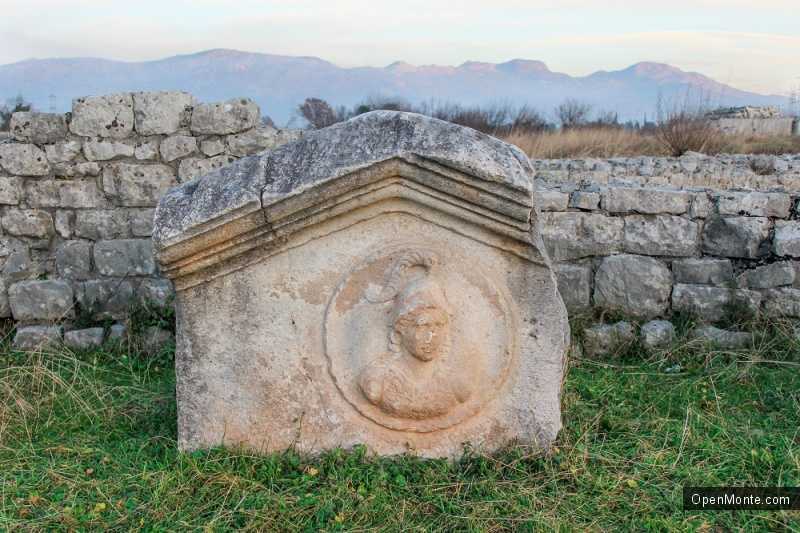 Right across the street on the left side was the Roman Forum with a basilica. The Forum was a rectangular plaza, the western side of which was decorated with a colonnade of a three-church basilica. The construction of the basilica was dedicated to the fifteen-year-old Flavij Frintan Balbin, whose equestrian gilded statue decorated the square.

From the very beginning, the city was supplied with water from the Cem River. Remains of this conduit are present to this day.

Since the 4th century, the eastern part of the city has been inhabited mainly by Christians, who built their churches and a bishop’s basilica. It was then that the Podgorica’s cup (Podgorička čaša), a large glass plate-like dish with illustrations from the Old and New Testaments, was made. 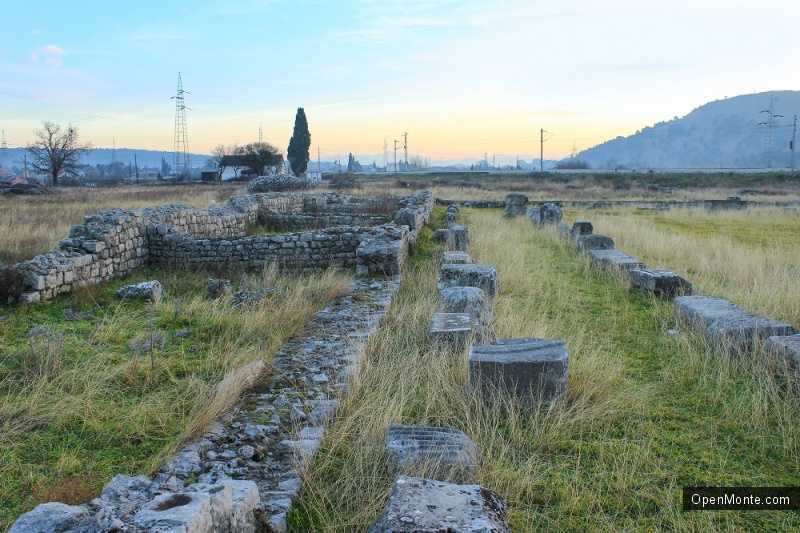 After the raids of the Goths at the end of the 5th century and after the strongest earthquake in the year of 518, Doclea loses its relevance and gradually dies out.

Up to the end of the 19th century, there were no official excavations and researches carried out here. In 1873, the Podgorica’s cup was found, and today it can be seen in the Hermitage Museum in St. Petersburg.

This territory was studied by local and foreign specialists, they wrote books about it. An expensive residential complex in Budva — Dukley Gardens — was named after it. But this did not add to Doclea’s popularity. Nowadays it is open to rains and winds, and every year it is getting smaller and smaller.